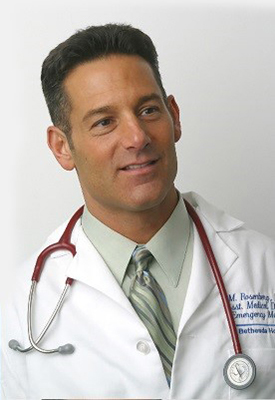 Dr. Rosenberg has been involved with drug research since 1991. Having studied the mechanisms of cancer treatment failure, the following concept has become blatantly apparent to Dr. Rosenberg. There are many substances that are toxic to cancer cells in vitro (outside of the body, in a culture medium), including chemotherapy and intravenous antioxidant therapy. These therapies, however, are more often then not, ineffective in vivo (inside the body). The primary reason for the ineffectiveness is that tumor blood flow is poor, resulting in a tumor that actually receives very little of the cytotoxic therapy that is being administered. In addition, poor tumor blood flow is associated with higher grade tumors and greater incidence of metastasis.

Dr. Rosenberg has since concentrated his efforts on improving blood flow to the cancer, while administering cytotoxic intravenous antioxidant therapy. In addition to using vasodilating therapy such as carbogen and isosorbide dinitrate, Dr. Rosenberg has just been granted approval status for an IND (investigational new drug) using Angiotensin II. Angiotensin II is frequently used in Japan in conjunction with chemotherapy to improve tumor blood flow.

Dr. Rosenberg recently appeared on Fox News in 2006, for inducing remission on a patient with metastatic lung cancer (to liver and spine) that was refractory to chemotherapy.