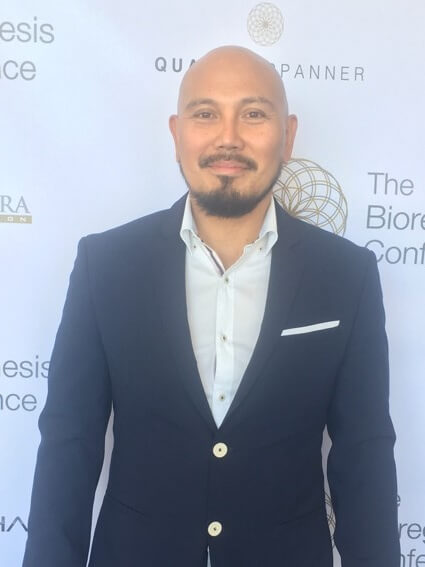 Jere Rivera-Dugenio, Ph.D. is a quantum mechanics researcher with a Ph.D. in Natural Medicine from the International Quantum University for Integrative Medicine in Honolulu, Hawaii. Jere specializes in advanced scalar and plasma energy technologies, quantum morphogenetic field physics and the larger paradigm of science known as the 15-Dimensional Unified Field Physics. He has lectured and presented his research findings at Fran Drescher's Health Summit, The Conference on Physics, Chemistry and Biology of Water, The Best Answer for Cancer Conferences and Autism One. Jere is the founder and CEO of Quantum Spanner, LL, The Biogenesis Conference and president of The GC Rivera Foundation, a non-profit medical-surgical-autism organization. Jere is also co-owner of Bridgeway Senior Care Center in Bridgewater, NJ.

In 2000, Jere underwent a powerful near-death experience (NDE) that shifted his consciousness from a 3-dimensional to a multidimensional perceptual understanding of First Creation Physics and the formation of morphogenetic scalar fields. Unlike modern day researchers who base their theories on 3-dimensional experiments, during his near-death experience (NDE) Jere experienced the true nature of dark matter, morphogenetic fields, which hold the blueprint upon which units of consciousness create our holographic reality.